It’s 10.30pm. I was going to bed half an hour ago. I was just rinsing my toothbrush and was a mere 15 feet from my pillow when I heard the cries. My eldest. Almost five years old and struggling with growing pains. Poor Poppet. That’s what happens when you’re more than 90th percentile for height and growing like a weed.

So I’ve grab my trusty tube of arnica cream and am sitting on her bed, rubbing ointment into her legs. Some nights this is all she needs – a couple of minutes of attention and a squidge of cream. Other nights however, the pain is just too much, nothing works and we end up on the couch, binge-watching Doc McStuffins on Netflix until she eventually passes out from exhaustion.*

Tonight, while I’m sitting there, massaging her teeny little calves, my eyes wander to the ribbon on her wall. The Grand Champion ribbon she won at the country show last year – for her ‘expert floral design skills’. 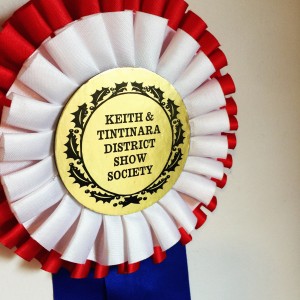 She is so proud of this ribbon. Together with her second cousins and her Gran they spent ages preparing their exhibits for the show last year – she was so excited to find out she was the winner. That ribbon hasn’t left the wall above her bed for the past 10 months.

But as I looked at it tonight, I wondered – where’s my ribbon?

Sure my four year old gets a ribbon for putting together a posey of flowers. But where’s my goddamn ribbon for everything I do?

In my almost five years of motherhood I’ve never been awarded a ribbon for my mothering.  No ribbon for managing to avoid an epidural during childbirth. No ribbon for keeping up breastfeeding for eight and 11 months respectively. No ribbon for successfully travelling 3000km by car with a two year old and a newborn when we relocated across the country. No ribbon for getting them to eat boiled carrots. No ribbon for producing strong, brave girls who didn’t even cry when they last got their immunisations. No ribbon for rehabbing my pelvic floor so I’m not dependent upon Depends.

No, not once have I ever been given a ribbon for my motherhood skills. But tonight. I feel like I deserve one. Here I am – it’s nearly 11pm now, and I really should be in bed. I’ve got the flu and have been laid up on the couch for the best part of three days. All I want is to go to bed. Because I’m exhausted, and I also know being out of bed this late isn’t going to help me recover – in fact, being kept awake by my daughters too often over the past week is probably a big part of the reason I got sick in the first place. Yet here I am, watching Doc McStuffins waiting for my five year old’s pain to subside, because I’m a Mum, and that’s what Mum’s do. (* Tonight turned out to be one of those nights – at least Doc McStuffins is a better role model than Barbie.)

So yeah, dammit. Tonight – I want a ribbon. Maybe it’s because I’m sick – and everything always seems so much harder when you’re sick, motherhood being no exception. Or maybe it’s the echinacea supplements talking, but I’m desperate for a bit of validation. I want just a little bit of acknowledgement for EVERYTHING that I do. And not just me – I want every Mum to get a ribbon. Because we deserve one – and we never, ever get one. Unless you get voted Barnado’s Mother of the Year – that’s a pretty big ribbon, but even that’s only given out once every year.

Motherhood is the most relentless, all encompassing task you might ever do. There’s so many variables, and you can rarely predict what you’re going to be doing or feeling day in, day out. And we’re all just expected to get on with it. To do it well and without complaint – no matter what you have planned, or how sick you are. No acknowledgement – for any of it.

I think that’s been the hardest part about motherhood for me. Such a lack of acknowledgement. I spent my first several working years within a Commonwealth Government agency. Annual performance reviews, key performance indicators and 360 degree feedback were built into my work ethic straight out of uni. I’ve grown accustomed to validation and feedback, and so yeah, I actually sometimes ‘need’ the “you’re doing a good job, keep up the great work” pat on the back that comes with getting a four-star or above review.

Here is where the chorus of lines such as “a job well done is it’s own reward” start in my head.

“Motherhood is it’s own reward”.

“Their little smiles make it all worthwhile.”

Yeah, yeah, whatever, not tonight. I’m not buying that line tonight.

Because stuff that. Because I’m not even sure I’m doing a good job most of the time. Should I have given her that Panadol? Did I let her stay up too late? Was she actually just playing me for that last half an hour after her leg pain seemingly settled – so she could get a couple of extra McStuffins’ in? I don’t know. For the most part, I have ABSOLUTELY NO IDEA what I’m doing with the Mum stuff. There’s no KPI’s here for me. There’s no five point rating scale. There’s no one paragraph summary outlining my strengths and weaknesses. So I actually have no idea what I’m doing. I’m flying blind and it completely bewilders me most of the time.

But I’m doing my best. The only way I know how.

And tonight, for that, I want a ribbon.