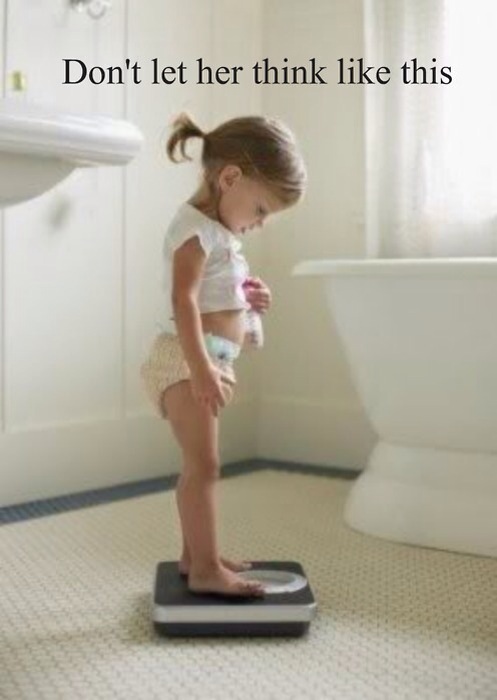 Why I threw my scales away

Have you seen this pic? It’s been doing the rounds on facebook lately.

It certainly strikes a chord with me.

When I saw it last week it made me realise that it’s been at least four months since I last weighed myself. And that’s all thanks to my daughter.

Right now, I have no idea what I actually weigh. I have a rough estimate, and I know it’s still a good 10-15kg above my “ideal” weight. But I don’t know the actual number.

However, there was a time, not that long ago, when I could have told you to the 100 gram mark, how much I weighed. Unknowingly, I’d developed a nasty little habit of stepping on the scale. Every. Single. Day.

Now, I can’t say that I ever really let that number on the scale define me, but it could, and certainly did, alter my mood. If it was down I was happy. If it was up, well that just plain sucked. Even if I was having a “feeling thin” moment where I felt like I was lighter, my confidence would implode if that number was actually higher than the previous day.

My weigh-in habit had slowly but surely become a full-blown addiction. It was the second thing I did every morning – after peeing of course – that 100g less fluid weight would make a difference! At the time I didn’t feel like my daily habit was having any significant negative consequences on my health or self esteem, it was just something I did every day. As much a part of my morning routine as brushing my teeth

Until I started seeing my three-year-old daughter stepping on the scales. Every. Single. Day.

Of course she’d seen me, and my husband, step on the scales over the past three years. So she wanted to do it too – kids always want to do what the grown-ups do – right?

When she was around age two it was highly amusing when she’d step on the scale, look at the number and say “six dollars!” before tearing off to play elsewhere.

But early this year, at the age of three, she started stepping onto the scale much more frequently. She’d drag it out of the under-sink cupboard, place it on the exact spot on the floor where I would place it (to avoid the wonky tiles and an inaccurate reading), then she’d tap her toe on top, wait for the zero to appear, and step on.

Until one day I watched her do this and it clicked in my head. This was now becoming a habit for her – AT AGE THREE.

Sure, she really had no idea what she was doing. No idea that she was measuring her weight in kilograms and grams. And she certainly had no idea how much she was “supposed” to weigh – and all the social and emotional baggage that went along with that. But I knew this didn’t make it a harmless exercise.

How long did she have? At what point, what age, would she suddenly understand the concept of weight?  Of “ideal” weights, “goal” weights, overweight, underweight, obese – thigh gaps. At age 5? 8? 10? Right now, she’s three. But in the blink of an eye she’ll be 13. And then she’ll be in the thick of it.

At 13, it’s highly possible that ALL she will care about is how much she weighs, what she looks like, what she’s wearing, how clear her skin is, how many boys think she’s cute. Unless…

Unless I can guide her in a different direction. Because that’s NOT the 13 year old experience I want for her, or her younger sister.

I want both of my daughters to value themselves for so much more than an inconsequential number on a scale.

I want them to understand that they have TRUE value in this world. That they have the ability and opportunity to do, have or be anything they want. That they can contribute AMAZING things to this society of ours. That their potential is completely untapped, beyond anyone’s comprehension or expectation. And that it truly doesn’t matter how much they weigh – as long as they have health and happiness.

Yes I want them to be healthy – I certainly don’t want them to be obese, or to have a life-long struggle with their weight like I’ve had. But I don’t want them to focus on their weight, to let it define and control them like it does for so many amazing, and otherwise successful, confident and accomplished women I know. Women who seem so “together” on the outside, but who can be crumpled by a simple flashing number on a digital scale. Women like me. I said earlier that I didn’t feel like my weigh-ins had a huge impact on my self confidence or self belief. But I was wrong.

That very day, after my daughter scampered off to play like a regular three year old. I picked up those scales and I put them away on the top shelf of the linen cupboard, behind a pile of towels.

I haven’t stepped on them since.

And it feels good. Since that day I’ve had freedom. Not to eat whatever I want, or to put on weight. But freedom from constantly THINKING about my weight. Even though I never let it consciously define me, I’ve now realised that on a subconscious level it truly did impact my psyche and erode my self-belief.

I know I’m not at my “goal weight”, I certainly don’t have the “perfect body” and I’m as far from a thigh gap as you could possibly get. But I don’t really care anymore. I respect my body more now. I focus on what it can do for me – how it can move me and what it can achieve.

Removing the scales from my life has meant that I can focus on my body in a much more subjective way now. I have to actually listen to it. I choose my food based on how it makes me feel. I can tell if I’ve been overdoing the wrong sorts of foods for me because I’ll feel my stomach bloat or my head get foggy or my sinuses get blocked. I no longer rely on that effing bloody scale to tell me if I’m doing the right things for my health. Because it has no idea. It never did. The really irritating thing is that I ALWAYS knew that. I knew the scale couldn’t really tell me how healthy I was, or how far along my health journey I’d come, yet still I let myself define my success by that flashing number. Do you know how infuriating that is!

So now, I’m letting my struggle go. I’m not battling with my weight, or striving to LOSE weight any more. I’m just focusing on simply being me – the best, healthiest, happiest version of me I can possibly be. I’m still conscious of what I put into my and my daughters’ bodies – but I no longer make food choices from a place of fear. I make decisions now based on health and a conscious respect for the amazing machine that is the human body. It’s taken me a long time, but I’m now at a place where I don’t really care how much I weigh – so I don’t need scales anymore.

And neither do my daughters.