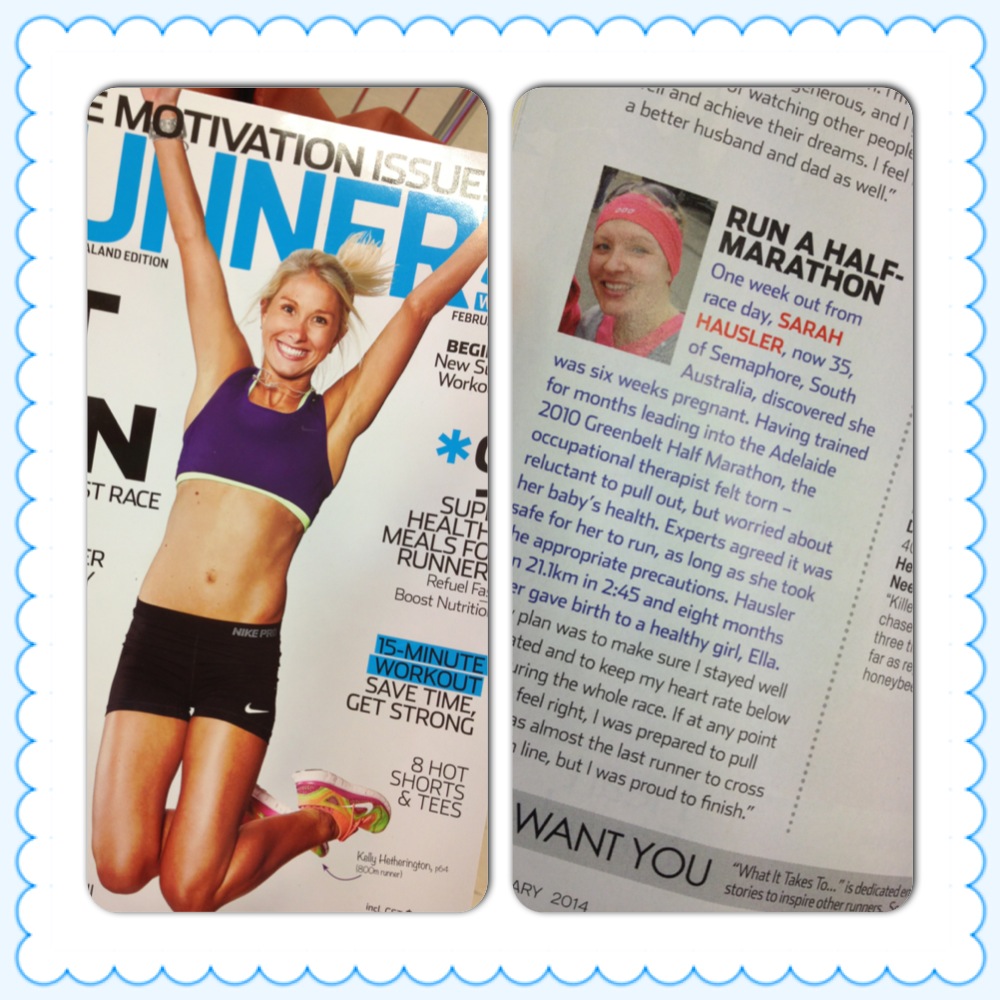 My five minutes of fame!

For those of you who don’t know who I am – I’m going to let you in on a little secret:

I’m so totally famous this month!

This is me, Sarah, within the pages of the February edition of Runners World magazine (the Aussie version). No, not the cover girl (maybe one day, when I get game enough to wear a crop top and mini-shorts in public). That’s me on the right – telling my story of how I ran my first half marathon – at seven weeks pregnant.

Like the story says, I found out I was pregnant a week before race day, after months and months of training. Making the decision to go on with the run was a tough one, I wanted to be sure I wasn’t putting my baby at risk in any way. I was never quite 100pc confident on my decision to go ahead with the run – as with so many decisions we make daily throughout our pregnancies. Even on the morning of the race, as I was driving to the starting venue, I still had doubts – so I rang my hubby to ask if I should back out.

He was amazing – I thought he would err on the side of caution – but what he said to me was this: “You can do this. You’ve done the training – you’ve been running while pregnant for the past few weeks anyway. You’ll be fine, just take it easy and see how you go. You’ll regret it if you don’t do it.”

Having his support was a huge relief for me. Even though this run was something I was doing completely for myself – this baby was part of both of us, and the risk was for both (well, all three) of us. Knowing that he supported me to run the race was paramount.

And he was right. I was fine, and I would have regretted if I had backed out. I kept my pace very slow, I basically walked up the hills – and I checked my heart rate monitor roughly every 98 seconds. I drank soooooo much water – at least three litres during the race itself – let me tell you – carrying a one litre water bottle for a 21km jog is pretty effing annoying though.

The trickiest thing was the fact I hadn’t let my running buddy, JC, know I was pregnant. We hadn’t told anyone at that stage and I didn’t want her to worry about me during the race. So there I was, going crazy slow up the hills, with JC powering on ahead, thinking she was completely awesome! (Which she is – though she was so deflated about her hill running prowess once she knew why she was killing the hills and I wasn’t!)

I was so proud to finish – I didn’t really care about my time. Before I even knew I was pregnant my goal was just to finish, not to hit a certain time.

I haven’t run another half marathon since then. Two years ago, I started training for one, but I was plagued by calf injuries and a few weeks before the race I changed my registration to the 10km. I knew I wasn’t strong enough to run 21km. Within weeks of that race, I was pregnant again with our second baby, so another half was off the table for a while.

But now, I’m back in the game – I’ve committed to running the Adelaide Greenbelt half marathon in May this year – the same race I ran four years ago. But this time – I want to knock 30 minutes off my time. Gotta love a challenge hey!

And, no, this time I won’t be seven weeks pregnant when I rock up to the starting line. And this time, it will be me kicking JC’s butt on the hills!